Joseph Pilates was born in Germany in 1883. As a frail child, he suffered from Rickets, asthma and rheumatic fever. That led him to a lifetime dedication to physical fitness. He studied gymnastics, skiing, boxing, yoga and more and as a teenager, he was in good enough physical condition to pose for anatomical charts.

He was in England when WWI broke out and held in an internment camp during the war because of his German citizenship. Pilates was committed teaching his fellow detainees a daily exercise class. According to Joe, when the influenza epidemic broke out (1918),

none of the participants in his daily classes got sick. Based on that success, Pilates was sent by the camp leaders to work in a hospital with wounded soldiers. Working manually with many patients every day was tiring and Joe came up with the idea of attaching springs to their beds so they could exercise while in bed under his supervision. This was the first Cadillac.

Upon his return to Germany, Pilates was approached by the Brown Shirts (soon to be the Nazi party) to train their forces. He didnt want anything to do with them and left on a boat to New York City. On that boat he met Clara, a nurse and his life long partner. They rented a small studio where he continued to develop his system of exercise, which he named Contrology – coordination of mind, body and spirit through the correct use of muscles and breathing, in order to control the entire body. Joe worked with many dance and movement pioneers such as George Balanchine, the NYC Ballet, Martha Graham, Ruth St. Denis, and more. In 1945 Joe published Return to Life through Contrology which is the only historical document indicating the order and sequence of the mat exercises. 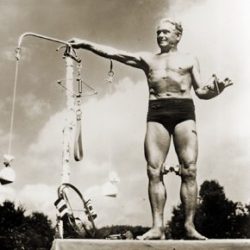 The New York Herald Tribune noted in 1964, in dance classes around the United States, hundreds of young students limber up daily with an exercise they know as a Pilates, without knowing that the word has a capital P, and a living, right-breathing namesake.

Pilates continued to teach and develop equipment and exercises with Clara until his death in 1967 at the age of 87. Clara continued to run the studio until just before her death in 1977. A handful of his students (the Elders) carried on his teaching and have influenced others to teach the Pilatesway.

Joseph Pilates left no will and had designated no line of succession for the Pilates work to carry on. Nevertheless, his work was to remain. Currently the name Pilates is a generic term and the method is used internationally by individuals at all levels of fitness as well as by dance companies, Olympic competitors, Broadway shows, sports teams, and more. Millions throughout the world are practicing Pilates and the numbers continue to grow.